What it means to be LGBTQI+ 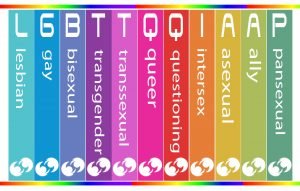 There are many types of sexual orientations and gender identities, so we explain what they all stand for:

L – Lesbian: a woman who is attracted to other women

G – Gay: a man who is attracted to other men or broadly people who identify as homosexual

B – Bisexual: a person who is attracted to both men and women

T – Transgender: a person whose gender identity is different from the sex the doctor put down on their birth certificate

Q – Queer: originally used as a discriminatory term, more recently, the term is used by people who are not heterosexual and/or not cisgender and people who reject traditional gender identities and seek a broader and deliberately ambiguous alternative to the label.

Q – Questioning: a person who is still exploring their sexual orientation and/or gender identity

I – Intersex: a person whose body is not definitively male or female. This may be because they have chromosomes which are not XX or XY or because their genitals or reproductive organs are not considered “standard”

A – Allies: a person who identifies as straight but supports people in the LGBTQQIAAP community

A – Asexual: a person who is not attracted in a sexual way to people of any gender

P – Pansexual: a person whose sexual attraction is not based on gender and may themselves be fluid when it comes to gender or sexual identity